The product can be stored on a permanent basis if it does not contact air The power generation time is two-and-a-half times of dry cell “1.5-order battery” which autonomously generates power with a few drops of water The magnesium air battery “enerseed®” optimum for disaster kit and stock will start monthly 100,000 pieces of mass production within Japan in 2019

DREAM ENGINE Co., Ltd. who implements development, production, and sales of next-generation battery (Head Quarters: Chiyoda-ku, Tokyo-to, president: Kazuhiro TADOKORO) will start the mass production of self-developed magnesium air battery “enerseed®” from the end of September 2018 and will produce 10,000 batteries per month in 2018 and 100,000 or more batteries per month in 2019 within Japan.

For electric power of “disaster kit” which has high compatibility with water
The magnesium air battery “enerseed®” autonomously starts power generation only with a few drops of liquid including moisture (bath water, juice, or coffee etc.) without using salt. The weight is 12g and the size is no larger than three piled stick gums. It is world’s smallest and lightest (*) battery. The recommended storage period in unpacked status is 10 years (permanent in vacuum status). The long-term storage is available as compared to alkaline manganese battery.
With these characteristics, this is the electric power optimum for products to be used in case of disaster such as stock battery, flashlight, lantern, and radio for disaster prevention. For a product which contacts water such as life jacket and rain gear, specification which lights up when the product gets wet in the water can be ensured by attaching LED bulb and using “enerseed®” as electric power.
As the magnesium air battery generates electric power utilizing “water” that the batteries have hated, it opens a lot of doors and contributes to the development of new products from new viewpoints. 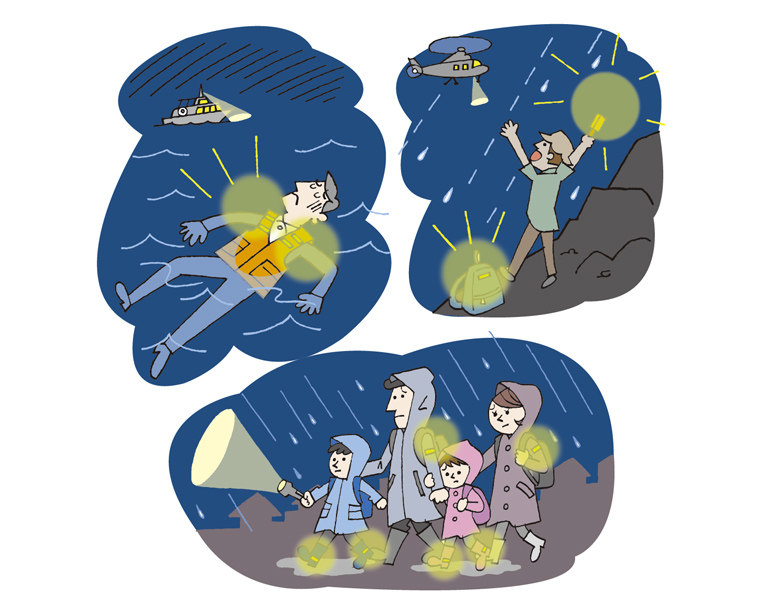 If lithium battery or manganese / alkaline battery sinks or is discarded in sea or river, it pollutes nature, however, magnesium is primarily contained in marine water by the gross, so this is the battery whose safety level for human body and environment is high if it is dropped in sea or river.
“enerseed®” can be discarded as general combustible waste after usage.

Patent technology which has realized stable electricity supply “HYBRID ONECELL (hybrid 1 cell)”
The existing magnesium air battery has various issues; “salt is required for power generation”, “electric power is weak and unstable immediately after the power generation is started “, “mass production is difficult because a lot of batteries are implanted in products”, “body is large and expensive”, “internal electric resistance is large and generates heat”, “thermal expansion is frequently caused”.
The magnesium air battery “enerseed®” obtained the technological patent and registration of trademark on January 21, 2018 and February 9, 2018, respectively. As the internal electric resistance is considerably decreased by “HYBRID ONECELL (hybrid cell)” technology making excellent use of multiple patent technologies which were obtained by repeating the improvement, the output fluctuation of electric power gets stabilized. It realizes continuous supply of stable electric power at 1.1V and 15mA. Moreover, it rarely generates heat and thermal expansion does not occur because the energy loss is dramatically cut. Additionally, the power generation efficiency is increased and the continuous generating time is increased to about two-and-a-half times of that of alkaline manganese battery.
This product defies the common sense of existing magnesium air battery. It is not primary battery or secondary battery. It is just an innovative battery which can be called 1.5-order battery.

For “enerseed®” which is converted into a commercial reality as “battery”, the mass production is enabled and the supply at a comparatively low price is realized. If the mass production is realized, it becomes a battery which can be used not only for disaster prevention stock, but also for securement of electric power in various fields. DREAM ENGINE will promote development and sales of products used for marine accident / mountain rescue etc. and hobby products such as outdoor products and hobby products with manufacturers and major trading companies.